Days of the Living Dead

As much as I hate to disappoint all the George Romero enthusiasts out there, this is not some blog about all the great 'Living Dead' zombie films from the beloved director. Rather, it is just a simple note or two about my son Bennett. Of course, the zombie reference can also apply to me...sometimes I feel a lot more dead than alive.

Sorry I haven't written much lately, I have been in a very negative place all week mentally so I didn't feel like just dumping it all. Bennett's condition has not improved, getting any solid info from the local hospital about what to do next or when certain appointments are supposed to take place has been like pulling teeth, work has been draining, my camera may have died, had some computer file issues that are gonna take weeks to repair (cause I can only do it in my free time), and Spring has kicked in with full force so I am sneezing like a maniac all day long.

Bennett, as of Thursday of this week, has begun to take Keppra. He is now on Topamax and Keppra combined in an attempt to stop the seizure activity. If anyone needs dosages let me know, but they are strong doses from what I understand. He is very wobbly, off balance...he is out of it a lot of the time. Sleeps a lot more. I barely recognize his personality some of the time, actually a LOT of the time. He's got a very zombie-like gate to his walk quite often.

You sometimes sit there and wonder if he is actually regressing or if he is just so doped up that he can't think straight. Doesn't say the words he used to say, but could be the drugs because once in a blue moon a word or two comes out. That could be parental wishful thinking, though. And sometimes, though much less so right now, he is laughing and giggling and smiling and interactive.

Anyway, that's about where we are this week. No forward momentum, but I didn't expect any. We don't have a further battery of tests scheduled out of state with the more renowned IS doctor until early June. Until then, which is what...5 to 6 weeks? I don't expect a lot to change. A continuation of trying meds and trying to keep Bennett from falling down and/or regressing any more if that's possible.

Let's close with some pics of Bennett. What is significant about these photos is that they were taken around 4-5 days prior to February 12th of this year, the very first day he had his first seizure. It is the last time I had the camera out taking pictures before all of this started. 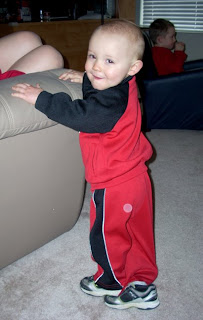 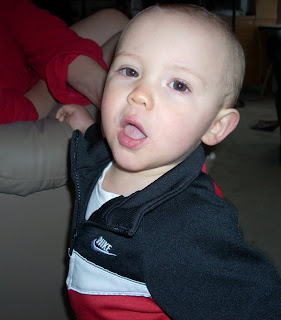 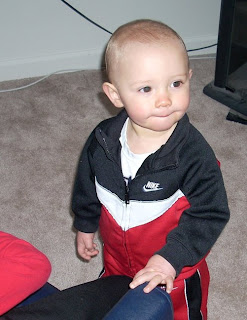 That actually feels like ten years ago, and it has only been a little over a couple of months.