More Super-Tangents for this week, WOOHOO! Trying to just take a break for the week in dwelling too deeply in the muck of all this epilepsy and developmental delays and junk for just a little while.

In a perverted creepy way sometimes. I can admit that.

But I do really love it. I love art too, and so I am in seventh heaven when I see Star Wars Art. From the conceptual side of the plate with sketches by Joe Johnston or paintings by Ralph McQuarrie and Doug Chang, or to comic book art by Adam Hughes and Dave Dorman, to awesome poster work by Dru and others, I can’t get enough of that funky stuff.

So I have this folder on my hard drive. No not THAT one...I have a voluminous folder of Star Wars reference. It’s size is mammoth, with Gigabyte after Gigabyte of Star Wars visuals, some very rarely seen, some more common. It’s great. I don’t know why I 'collect' digital images, but I'm sure it puts me into some circle of Hell reserved for TRUE geeks.

As part of my distractionary afternoon I was surfing through the Star Wars folder and I tried to find my Star Wars art folder to poke around and look through it. It was gone. I almost crapped my pants. In a panic I ripped through all my burned CD’s and DVD’s, and thankfully I found a back-up of the folder and was able to restore the art folder to its proper place. It's missing a bunch of stuff that I downloaded throughout this past year, but I can live with that.

Anyway, back to the matter at hand. When I came across the Trevor Zammit Star Wars art in that folder, I decided to put up an Artists Alley blog and show it, because his Star Wars work is some of my all-time favorite, though I dig a ton of stuff that he does. He has a very unique, gifted mind when it comes to art. I admire his work tremendously and would kill to have a tenth of his imagination.

I first encountered Trevor Zammit's unique style when he did some freelance work on a Palisades project called Freakables that we made back in the Palisades days. I really dig his stuff, and was thrilled when we hired him as a Production Assistant for about a year. While Trevor worked at Palisades he did a few drawings for me from the Star Wars galaxy, in his very unique way. Here’s his take on the one and only Dark Lord of the Sith... Pretty cool huh? It’s not the same type of style as the Cartoon Network stuff, but it is that general family, although Trevor tends to push the reality of the characters to a whole different place (which I prefer), something the Clone Wars and even the GG animated maquettes don’t do. Case in point, check out some of these quick sketches he did. 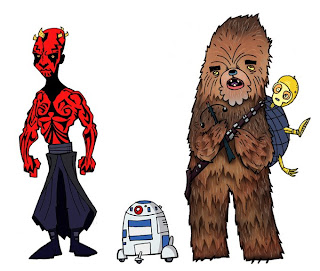 What sucks is that I KNOW I am supposed to have more than this, I just can't find them.

Let’s finish it up with my favorite piece he did. Not sure why, maybe it is just because it is Jabba the Hutt, and we just don’t get enough Jabba-dy goodness in our lives... 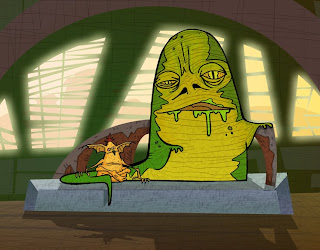 If you ever feel like checking out some more work by Trevor, you can always visit his website and take a look for yourself. Not sure how often he updates it, but I see some stuff on there I know is fairly current. I figure I'll probably re-visit some of Trevor's art down the road, I'm sure at some point I'll write about some of the stuff he did at Palisades, some of which never got turned into product but would have been AWESOME to see on the shelf.