The Skinny on This Week's Cleveland Clinic Visit 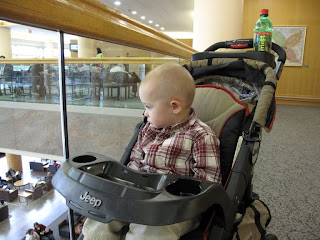 So, this week we went up to Cleveland Clinic for follow ups with Neurology and Surgery and our first visit with an Oncologist. The follow-ups went well, as far as how Bennett is doing when it comes to recovering from a brain surgery and managing his seizures. While we can not know with absolute certainty if he has seizures of any kind (absence style or some other erratic brain activity) or not until we have an EEG follow-up, outwardly he doesn't appear to be having them.

There has been the occasional staring that I freak out about, but I can't make a mountain out of a molehill until EEG can support the construction.

Medication plan is remaining the same, keeping the Lamictal where it is while continuing the wean from Vigabatrin. He'll be off of the Vigabatrin probably within a few weeks I think. That's cool. Pretty routine follow-up on the Epilepsy side of the Bennett medical triangle. When it comes to the recovery from the surgery itself, that part was, also as expected, fairly routine. The surgeon said the incision looked good, and it does, and basically just asked us some stuff about how he was doing.

One of the things of note from the Surgery follow-up was regarding Bennett's lack and loss of pre-existing language skills. The surgeon said it could be 6 months or even a year before he is able to get to a point where language and cognitive skills would be easier for him. I don't fully understand that, but again, I'm going to be patient, as much as I can be, for that. No need to push for a 'why', especially when nobody really knows.

Another question for Neurology and Surgery is for them to put their heads together to try and determine what is causing some of Bennett's aggressive behavior. Bottom line is that I do not think there will be an answer there. His aggression isn't even as bad as it was, so it is less of a concern to me than language and other higher learning aspects of Bennett's future. But they plan to talk about it and get back to us. Hell, I know of 'typical' kids who are aggressive. We'll see. 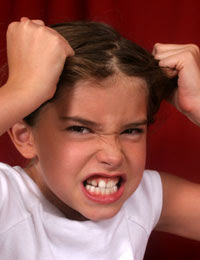 Besides, this week Bennett has spent two 'test days'...essentially half days in the same Day Care he was in before the seizures. He did well both times. Next week we'll try two full days. Then go from there. But no incidents of biting other kids or hitting other kids, and he is interacting with them even though most of the kids in the 'class' are cognitively ahead of Bennett. But he played and had fun and that's promising certainly.

Which serves to remind me that, when it comes to knowing what Bennett's cognitive abilities or limitations will be, the whole process is gonna take some time. I know it, you know it, and we're dealing with that part of it as best we can. And that, frankly, is the easy part of this whole thing in my opinion.

Though I will say this. It isn't until you get him around other kids his age that you see just how far behind he really is. And the sad thing is, his birthday is coming up, next month. At the age of 2 he knows less and can say less than at the age of 1. That stings. But...you move on. You figure out a way to fight through it.

The big question for us up there this trip was on the Oncology side. The Oncology office waiting area happened to have a VSR-4 Riddell Helmet from the Cleveland Browns in it, with a bunch of sigs. I took pics because it was interesting and also it was great facemask reference for one of my projects. 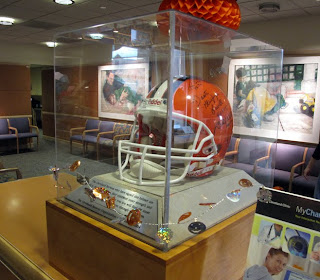 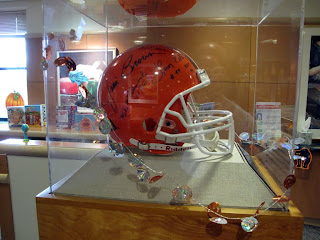 Here's the deal. Dr. Oncologist says there is a 30-40% chance that his tumor could return in the next 2-3 years. In order to be able to catch it if it does, we have to have an MRI every three months. The first of these is scheduled in the first week of December. Dr. O also says if it comes back it typically comes back in the same region, and that if it comes back the first reaction is surgical, not chemical.

Go back in, take it out again.

Maybe. The chances are 30-40%. Now at first I have to admit, I was staggered by this number. Maybe I still am. But on the other hand, you could look at it this way...there is a 60-70% chance that it will NOT return in the next 2-3 years. Apparently, after that 2-3 year mark, chances decrease, I THINK. On this point, clarification I did not get. Only time will tell. 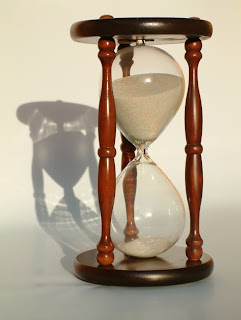 The things on are To Do list over the next few months to a year (unless something drastically changes) are basically thus:

-Keep a watchful eye on his head, see if his tumor comes back. MRI every 3 months until further notice.
-Continue to keep an eye out for seizures, have follow-up EEG's.
-Continue weaning him off of Vigabatrin, stay on an AED for 2 years.
-Get him into some therapies, as many as is allowed, and try to get him to learn. See what he CAN learn.
-Get him interacting in 'typical' and 'special needs' circumstances. He is, in fact, being reviewed for Autism in November to see if he is on that spectrum. If he is, he may go to a private Day Care academy for kids with developmental delay.
-Try to have patience with him when he essentially can't understand a thing you say or tell you what he wants or needs.
-Try to keep this family together during these rather pressured times. My wife and I have lots of unity, but we also have a lot of difficulty.
-And for me, try to get some help on the Psycho side before I completely lose any marbles I have left.

Now see? When you put it like that it sounds downright easy, don't it?

Check this out. Maybe the coolest thing I have ever seen. On this trip I was sick of the parking fees at the place we normally park our car so I tried one of the hospital lots. This was next to the elevators on the 6th floor. Is that freaking GENIUS or what? 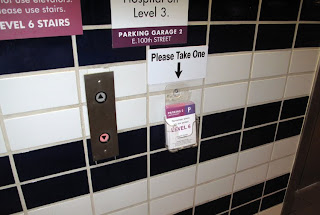 A little card you can take with you so you don't forget what floor you parked your car on. I dunno...I just think a little thing like that, an assist for people who clearly are gonna have a LOT on their mind, is one of the reasons why the Cleveland Clinic gets high marks from me. 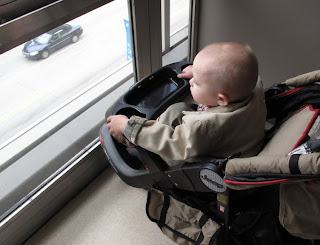