If you knew how many different blog entries I have started, written quite a bit in, then saved and stopped without finishing or posting you'd probably short-circuit.

Not sure why either. I'm usually very good about articulating myself, about translating my thoughts into something that resembles cohesive writing and then assembling it all and hitting 'Publish'.

Lately? Not so much. I get going on some topic, start looking over what I have written and say 'blech' and just saving it in hopes of coming back to it later. By the time later gets here, I look at it and still end up saying 'blech'.

It is what it is.

No flies on you.

[Insert any other cliche here].

In the meantime, as I recall, I promised some photos from Carter's 6th birthday party. And I intend to deliver. So here goes. Prepare thyself for the photographic onslaught to come.

First up, because I am an odd human being, I shot a lot of photos of some of what we were giving him prior to the wrapping of said gifts. Just happened to be doing a photo shoot anyway, so I figured...what 'da Hell. 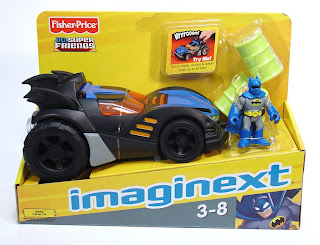 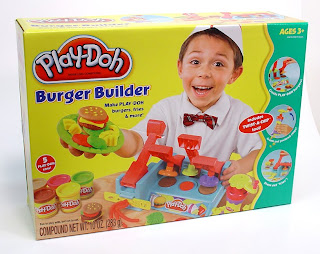 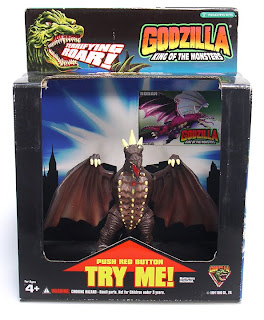 That last one is a classic Trendmasters Godzilla action figure of Rodan I picked up on eBay. The main theme of the party/birthday was Godzilla, since Carter is still into Godzilla big time, though Play-Dough and Batman are up there.

So in keeping with the theme, I needed to try to find a pinata to fill with candy that somehow looked like Godzilla (since pinatas are a sort of Saunders family tradition at birthdays). Not a lot of Godzilla product here in the states PERIOD let alone a pinata (and damn I wish I knew how to make the little swooshy mark above a letter for a word like pinata - this one is gonna bug me until the wee hours). 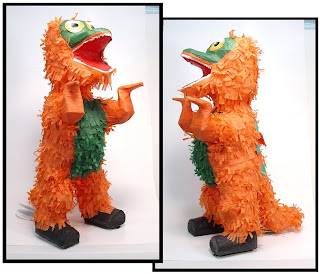 But I did find this orange monstrosity, with the same relative proportions of Godzilla, but it was...well, orange. Oh well, in the end Carter didn't care. It went well with his cake, which also had a Godzilla on it.

I put the image together with some font that was called Godzilla and a drawing I just blatantly stole off the internet. Then I gave this print-out to the guys at the Cake Store. Somehow they transfer the image you give them to the cake. In all likelihood it is probably very unhealthy or toxic or something and we just don't know it yet. 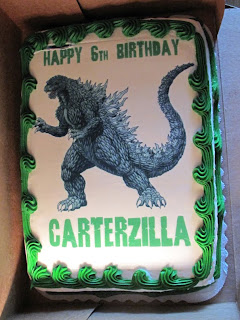 Carter insisted he be allowed to eat the head. I tried to just not think about that one too much, though I'd be lying if I didn't ponder at least for a little while just what the fuck that means on a subconscious human level.

Anyway, party begins, and soon the pinata was getting attacked. Carter took the first swing, and a lot of the other kids took their shots. 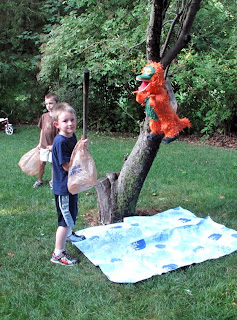 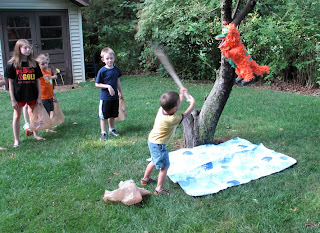 Who actually took the first piece off, the tail, with his attempt? 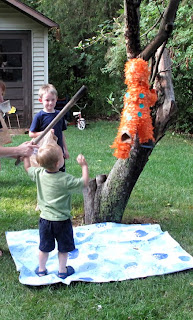 Yup, that's little Bennett there, but then again...Mommy was helping. But it was about the ONLY thing about the party that Bennett seemed to enjoy. More on that later.

After the pinata, it was time for the Opening of The Gifts. 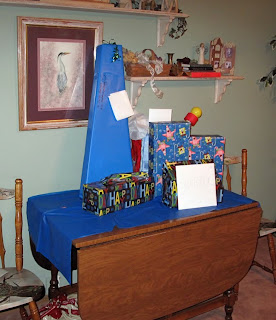 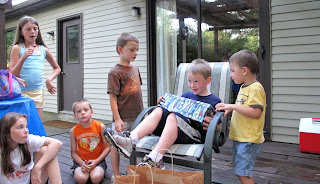 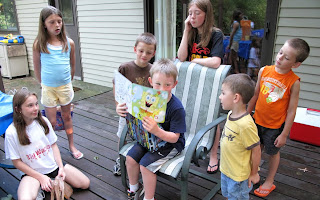 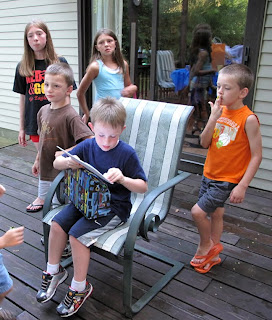 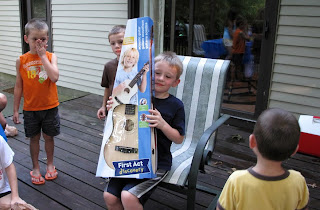 Then it was time for some cake. Again, Carter insisted that he be the one to consume the head. Hmmm... 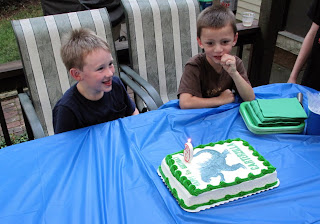 Carter had a great time. So did the other kids. Except one.

I mentioned in a blog previously or in a Facebook thingie that I had to leave early and take Bennett home. He was either just out of it and non-expressive or howling and screeching like I've also mentioned before. These photos I took of him sum up his basic lack of interest in anything that day. 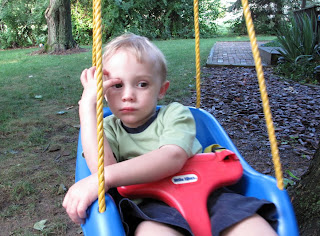 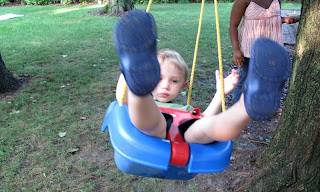 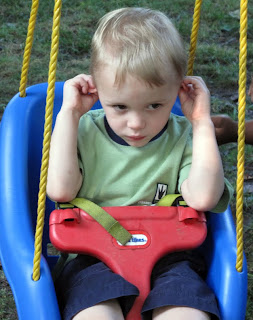 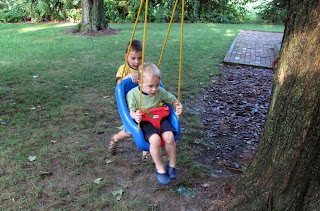 And we tried hard to stimulate him. But nada. Except when something bothered him. Then he would do his other thing. What a fucking bummer. I hate that. I much prefer to see him smiling and having FUN, which he does do by the way. But just not this day.

After I took Bennett home, I set up the last gift of Carter's that I was saving til the end. Yeah sure, it's a hand-me-down, my old X-Box, but to him it's brand new and the two games, yeah I know...USED...both work great and he loves 'em. 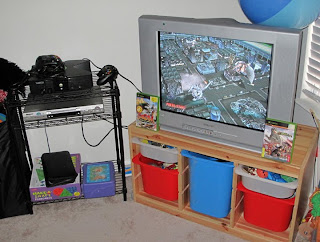 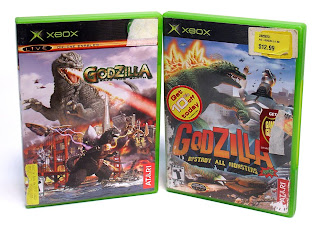 That's the birthday, in a very large nutshell, despite my piss-poor writing skills and equally disconnected mood. Hey...at least I posted something finally.