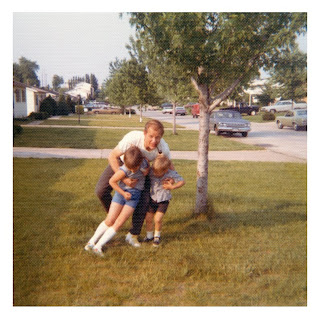 I do not have a lot of anything when it comes to my Dad.

Not a lot of memories, not very much memorabilia, and a small handful of photos.

The simple story is that my Mom and Dad got divorced when I was around 5 years old. I saw him very infrequently after that, and the last time I ever saw him or spoke to him I was 10 years old and it was in a courthouse.

He died in 2006, and we never reconciled prior to that. I found out about his death by searching the Internet. No one told me, no one called. His two surviving 'biological' children (me and my sister, to whom I am also estranged) were not even mentioned in the obituary. A more detailed account of the whole situation can be found in a blog I wrote about him last November. In case you're curious or new here. Otherwise skip it. It's REALLY long. Even for me.

Clearly that relationship, and the monstrosity of a mentally unstable Stepfather that followed, contribute greatly to my overall Fucked-Upedness. I'd have to be an idjit not to have figured THAT out by now.

But, even though I didn't know him, even though having a son didn't mean that much to him, I still think about him often, and I still look at old photos of him from time to time.

I thought I had all of them that existed, but as it turns out, I didn't. On Monday this week an envelope arrived from my Mom (Hi, Mom.). She reads this drivel, you know.

Hmmm...that's weird, I don't recall her mentioning that she was sending me anything when we talked on Sunday.

In it were two photographs of my Dad that I not only did not have but had NEVER seen before. Getting them was like finding a 50 dollar bill in a coat you haven't worn in a couple of years. It was great.

I really appreciate the fact that she sent them to me. 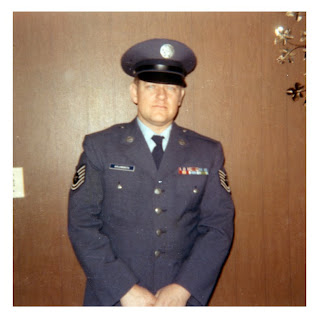 He was in the Air Force, and I had never seen a photo of him in his dress uniform. That's pretty cool. I often wished I had chosen a different career path. Not military, but one where uniforms play a big role.

This other one...I have no idea who the other dude is. 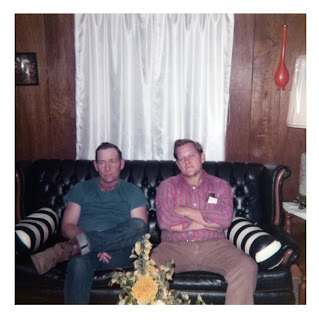 I'll have to remember to ask Mom about it during our regularly scheduled Sunday telephone conversation, which we have managed to maintain now for I think over 2 months. I suggested it during that very dark five weeks I wasn't blogging. I felt like the distance between us physically was starting to really affect us mentally, or at least me (can't speak for her), and if we just sort of had a plan it might help to keep better in touch with each other.

We've been keeping up with it, and it helps us both I think. It's just a good thing all around.

Email ThisBlogThis!Share to TwitterShare to FacebookShare to Pinterest
Labels: Family