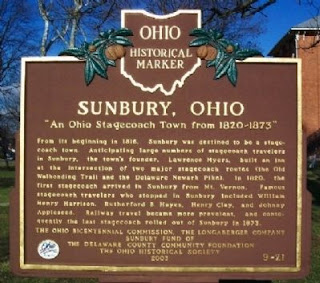 In this sleepy town of Sunbury, which is located north of the slightly less sleepy city of Columbus, Ohio, you have to look for interesting things to do on the weekend to keep yourself...less sleepy. Cause if you don't? You get more sleepy.

It's that kind of place.

But that's why we moved here. Because nobody mustard-gasses a bunch of us simple folk or flies a plane into a small town in the middle of nowhere. And of course, people are typically a lot nicer to each other here too. They also tend to know each other's business a lot too, but that's a whole DIFFERENT topic. 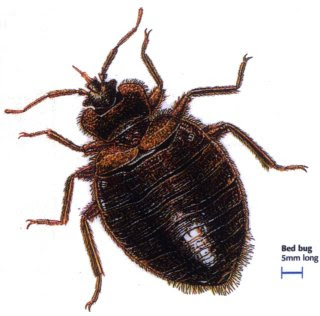 Yeah, we don't get terrorists, but then again, we have a bit of a bed bug problem. Why? Cause everyone SLEEPS so fuckin' much.

What? You think we don't see the correlation? Of course we do, and we discuss it EVERY Sunday at the Cracker Barrel while we scratch each other's backs and pick the bugs out of each other's hair.

It's like the chimps in the zoo, only we get sausage gravy with biscuits. DEEEEE-LISH!

So other than watching Ohio State play their football, we do some cool local fall stuff. One such tradition is the Fall Festival at the Alum Creek State Park, which essentially is a bunch of dedicated campers who all set up their tents, campers and trailers at Alum Creek State Park Campground, decorate their sites with wacky Halloween set-ups, some VERY sophisticated, and then camp for the weekend.

Shots below are from two years ago. I still smoked, Bennett had a brain tumor in his head that nobody knew about yet and he had not had a seizure a day in his life. Brett Favre was a New York Jet and I still liked him. 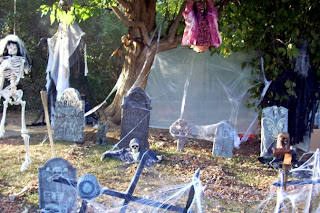 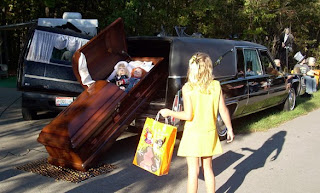 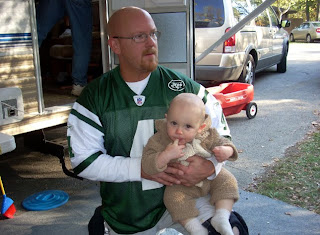 Usually, at these weekends, there is an Ohio State game going on that you also get to watch at all times going down where no matter where you happen to walk through the campground, you are in visual range of a television with the Buckeyes playing, and the cheers and jeers and everyone wearing their red and grey. That's wild.

With the recent creation of the icky that is the Big Ten Network, you don't see as much of that anymore. In fact, this past weekend, Jen's parents, who are the ones who always set up their camper, came back (well, Jen's Dad did) to their house to watch the early game on the big TV and then returned to the campsite later in the afternoon.

Now, a few things happened (in addition to the Big Ten Network having that game) that made this weekend that should have been loads of wacky fun a little bit of a letdown. Don't get me wrong, it was still really cool and we all still found some fun nuggets, me especially if you can believe that, but it was not the best year we've had out there. Here's why.

The first problem was that Jen's sister is about ready to pop. She's pregnant, due any day, and no one was really sure whether or not she was gonna go this weekend. This mean that A) she and her kids and hubby were not in attendance, which was a pretty significant bummer in and of itself and B) none of us were sure if any of the remaining crew were going to need to pack up shop and head up to Cleveland for the birth.

Second, another family member, a cousin of Jen's, was celebrating a first birthday of her daughter, a significant milestone, so a bulky amount of family shifted over to that event and were absent from this event. It was a simple matter of timing not being right, and this happened to be the group that features one of the boys that Carter is SUPER into right now, so it affected his enjoyment level. Again...out of our hands, a 'Waddya Gonna Do?' kinda thing, but that's hard to explain to a six year old boy who wants to see his little buddy.

Now, Reason 3. Bennett. But not our Bennett. The Other Bennett. 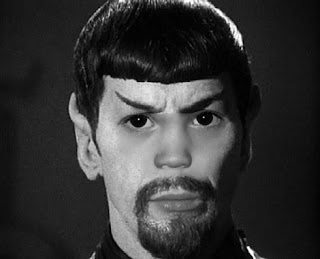 But I'm not sure I blame MUB for showing up because the biggest reason for the weekend being so difficult was the weather. We got screwed this year. For the first time since we started doing this the weather sucked. And what made it particularly crappy was that this was the first year that the Saunders got such an AWESOME site in the campground, right on the water with access to the water a few feet away. There was gonna be some serious kayaking.

Sadly, we all got quite enough water from the sky.

And to top it all off? Yours truly, Captain Jackass, forgot to charge my camera battery prior to going out there. I'd been using it all week for eBay photos, and meant to, but I just forgot. So I started taking some pre-shots. Of the campground and the like, but then I got the flashing lights. Then the warning beeps. Danger Will Robinson! DANGER! 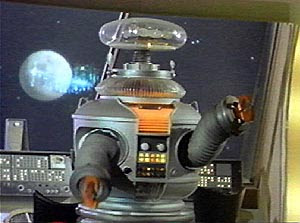 By then? Too late. Yup. Battery ran BONE dry before we could get any shots of the kids in their costumes. Which might have been a blessing in disguise, since it was raining during the Trick or Treat section of the Festivities and I needed to spend my time trying to keep Bennett as moisture-free as I could.

Here's a smattering of shots of this year of us trying to stay dry, the campsite, such as it was with most of the stuff pulled in out of the rain, and so on. As much as I got before I lost power. 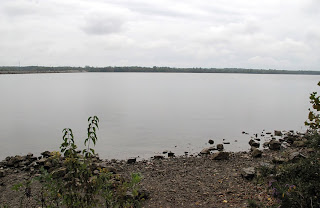 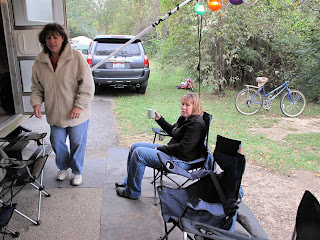 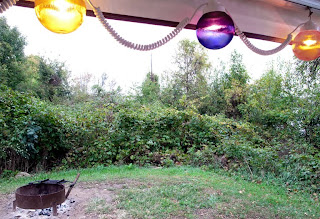 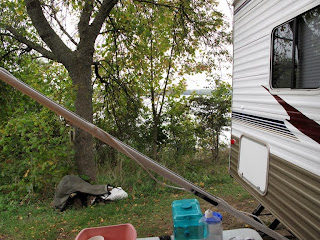 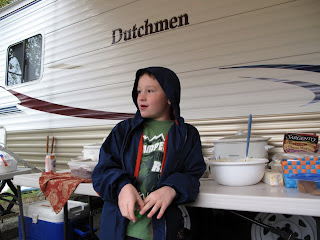 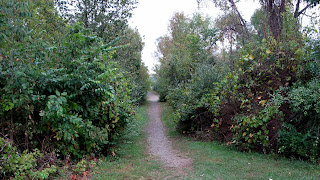 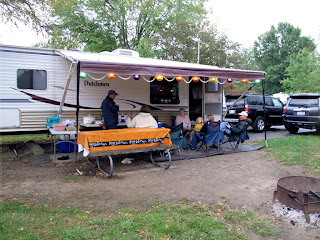 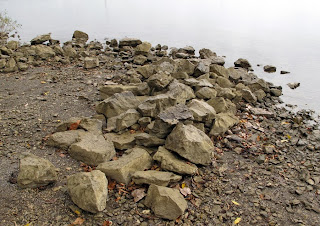 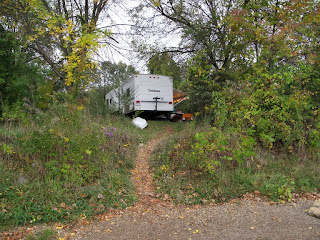 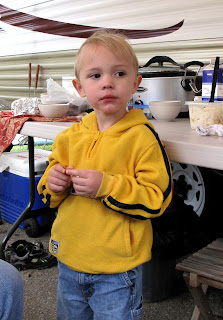 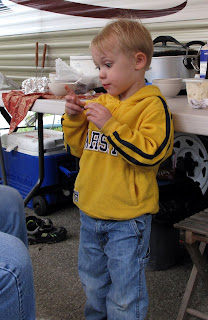 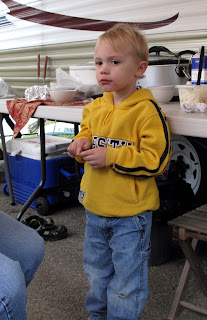 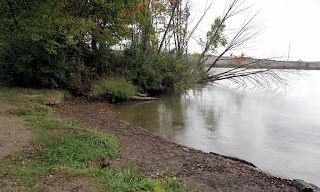 But still, we had some fun, we had some laughs, and I'd do it again, even knowing all the things I know now. How's THAT for a positive attitude, thank you very much.

Besides, we've still got several weeks until REAL Halloween, and I'm hoping to get some other costume in the works before that, and today, bless her leaky heart, my Momma sent me a photo she took of Carter when she was here last weekend of Carter when he got his costume (that HE picked out by the way) so at least I have a shot of it. 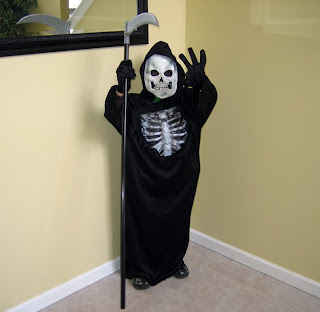