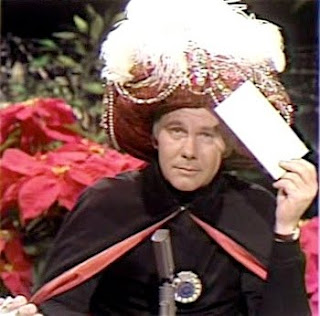 As Carson would say (does that show my age?), I hold in my hand, the LAST envelope.

Yes, it is finally over. This concludes the list of Random Things I'm Thankful For in 2010, or what I called LOFTY 2010, but I GOTTA get a better name.

Both home and abroad, living and deceased.

I've always had a deep appreciation for anyone in the military, especially around the holidays, when they have to be away from their families in some far away land, in danger, in harm's way, and sometimes, too many times, for all the wrong reasons.

Thankfully, most of the folks in our family are not deployed at the moment, which is a good thing, but some people I know have family members they are missing. Hopefully they are safe and they are well.

One person I often think of when I need a strength boost, or a reminder of how difficult it can often be for those in the military, is the man in the photo. That's Captain Brandon Gorman, of the U.S. Marine Corps, father to Maddie and husband to Liz. Liz is the author of Maddie's Marathon, a blog about Maddie's battle against Leukemia and Infantile Spasms and other forms of Intractable Epilepsy.

I have sincere admiration not just for Liz, for fighting many battles on the homefront on her own when Brandon deploys, but an amazing awe for Brandon, whom I have never met, but I cannot imagine how he does it...he leads men in foreign lands while being cut-off from knowing what is going on back home with his daughter's condition. Only getting updates when he can.

Now THAT is a real Superman. And I suspect, though like I said I don't know him whatsoever, only what I know from the things Liz has said in her blog and the few times I have communicated with her, that he would shrug that off and very humbly say no to that.

And, of course, that's exactly what makes men like that great, and what makes men like me admire them so much. There are times, when I think about the career paths I chose, when I wish I could go back and do it over again and do something that had more meaning to it, like police work, or medicine, or the military.

I write so often about so-called 'super'-heroes, but the real heroes of this world are those ordinary people who have those types of careers where they put the needs of others above themselves, and for that we should ALL be thankful.

Even though, lately, I have begun to ask a lot of questions about whether or not it is the right path to be on, I certainly can't deny that Applied Behavior Analysis (ABA) Therapy, has in some ways helped Bennett make some progress over the past year, in some areas.

I say some, because sadly we still are having a devil of a time actually communicating with him. But we don't know if this is because of the Therapy itself or just because of what is actually missing from his brain.

How CAN we know? Not sure we can. Not sure we ever will. I do know one thing certainly. This year, as we move from 2010 into 2011, will see a lot of transitions I think. Changes will happen in a lot of areas, not the least of which will be the direction of Bennett's life overall.

It's been over a year since the surgery, and he's really not that much closer to being able to tell us anything about what he wants or what he needs. This will be the pivot year, and whether it goes in the direction of B.F.'s theories or somebody else's is going to be the key, I think, to Bennett's future.

And there have been so many. Since long before the surgery, and today, long after. The photo is of one of his Occupational Therapists, from a time before his surgery, who was working with him prior to his surgery, as we tried to keep his skills from leaving him completely even though the daily seizures were robbing him of much of what he was learning.

She was great with Bennett. Her pregnancy, however, cut her involvement in Bennett's therapy short. But what's so great about her and many of the other therapists who have entered Bennett's life is that even though their time with Bennett comes to an end as a therapist, they still make and effort to stay connected in some way.

That kind of thing is nice, and it makes you feel good as a Dad, that your son touches people in such a way that they would want to stay connected with him. Of course, I REALLY hope that some of his more...aggressive...behavior that he has started to show more of lately changes, because I'm not so sure he is making the same connections he used to. (Yeah...it's gotten really bad, but I'll get to that later.)

Still, I know that everyone who works with him sees in him...something. Which is good, because often, as the parent, we get so bogged down with worry and fear it is hard for us to see anything BUT the worry and fear.

The therapists constantly feed us heaping spoonfuls of hope, and that's always good.

While Bennett was having the surgery to remove the tumor from his brain, a lot of people did a lot of things, sent a lot of things. One thing in particular I had always meant to talk about, but never did, I wanted to mention here.

I'd had the good timing of being at same hospital, Children's Hospital of Michigan in Detroit, for a PET Scan for Bennett while Elaine, the author of Our Sweet Sophie, was there with her husband Brandon and Sophie herself, while Sophie was in the middle of a surgery to attempt to stop her own Infantile Spasms that had been plaguing her for so many years.

It's interesting to meet, face-to-face, one of the Internet Mom's and Dad's who you encounter through blogs and message boards. There is an almost familial connection there, even though you have never met before. I can't really explain it. So I don't really try to. It's just something that you either experience or you don't.

When it came time for Bennett's surgery, a few months later, Elaine sent a book and a stuffed animal over, on Sophie's behalf, and it was beautiful. A real treasure, about the animal and how it was a 'protector' of sorts to the owner of it. I, of course, totally dropped the ball and in my very confused state after the surgery totally forgot to send a Thank You card to all the people who sent stuff.

Then that awkward 'too long' amount of time passed where I couldn't, so I basically said that at some point I'd essentially have to figure out a way to make it up to all the people who sent Bennett something during his time in the hospital.

#50 - Thanks to Everybody Else in Our Little Club, I Wish We All Could Lose Our Membership Cards

Last, but certainly not least, to all of the people who are a part of our little 'special needs' community, I thank you. For reading my words, and for those of you who write your own, for sharing yours.

Your innermost thoughts, your dreams, your fears, your hopes, your doubts, your experiences.

The first day that Jennifer and I came home after Bennett's first EEG, after we heard the words 'Infantile Spasms' for the very first time, we did what any parents would do, we hit the Internet. At first, we were greeted with the cold, hard, reality of medical fact and definitions which offered little warmth, and even less hope.

It was only after we discovered Broc's Story page, then started exploring from there and discovering more Bloggers with kids who had the same condition, did we start to feel anything at all like human beings again.

I can't mention everyone by name, that would take forever and I would certainly leave someone out by accident...all you have to do for that is just look right, there is the Blogroll and the other Sections where I call out some of the blogs I follow. You know who you all are. And you have meant, and continue to mean, the world to me and my family, providing kicks in the ass when needed, shoulders to moisten when needed, information when needed, laughs when needed.

As much as the three other people living in this house with me, you are also my family, and there is simply no way to express how truly thankful I am for all that you have done and continue to do for me.

But like I said in the title, I'd give anything for all of us NOT to know each other, know what I mean? Or at the very least to have the reason that we all were connected to be that we were all a member of a Block Figure Community Forum or something of that nature.

And if we have to go to war against all this crap that attacks our kids, I can't think of a more thoughtful, generous, selfless, motivated and self-actualized group of people I'd rather fight side-by-side with.

Email ThisBlogThis!Share to TwitterShare to FacebookShare to Pinterest
Labels: Gratitude