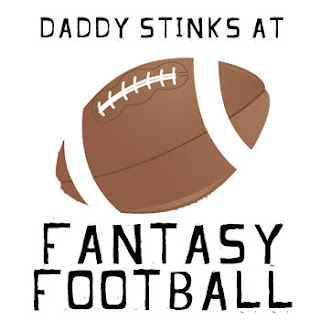 WAY back at the beginning of the NFL season, I mentioned that for the first time that this was to be the first year in a LONG while I would not be participating in Fantasy Football.

Turns out I was wrong. At the 11th hour, my homies at the old Creatus Maximus message board pulled together a handful of guys to participate.

The season did not start well.

I had a dismal 2-4 record to start the year, even though I had some pretty good players, including the NFL's number one rusher in Arian Foster and Tom Brady, who I have had on my team as a QB almost every year and who always puts up good numbers.

After that 4th loss, I decided that I was sick of losing. I started making moves. I took some lessons to heart that I had learned from Mike Horn, who introduced me to Fantasy Football, and I started using the Free Agent market like a revolving door based on potential match-ups of the upcoming week. By the end of the season I had more 'moves' (transactions or movement of players) to and from the free agent list than any other manager. 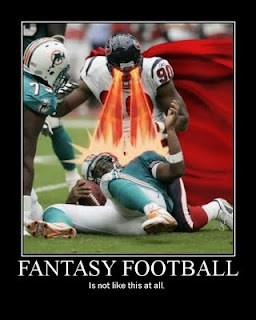 I proceeded to win the next 7 games in a row. And although I'd love to take ALL the credit for that, I think a couple of the guys seemed to quit midway through and just didn't seem to care. In other words, they didn't make roster adjustments and kept players in their line-up they clearly should not have. (Does that tarnish this? Perhaps...but I'd rather enjoy it.)

I finished with a record of 9-4, one game under the leader of our league at 10-3. I had a playoff BYE, something I had never had before, since I was the number 2 seed. Then came this weekend's playoff game.

What does that mean? It means that for the first time ever, since I stared playing Fantasy Football, next week my team will be playing in its first Fantasy Super Bowl. After starting 2-4. That's a pretty big deal to me, in a winter filled with lots of disappointment in a lot of different areas in my life, as stupid and ridiculous as this must sound to a lot of people, this one insignificant accomplishment actually means something to me.

And I know it sounds just as cliche as it does when the players in the NFL say it, but win or lose, I am just happy to have made it to the Super Bowl.

I want to win it, obviously. I NEED it this month, it has been JUST as hard a month of December as I thought it was going to be and THEN some. And even though Elizabeth has already stopped reading by now since this is sports related, she totally could understand why something so little could become something so big in a world such as ours. 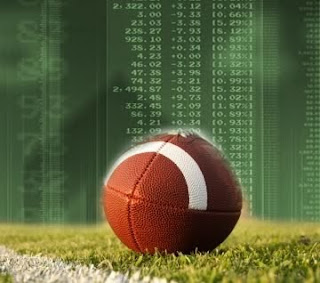 Clearly, it won't be an easy victory to pull out, my opponent's team is very, very good. He has won several Super Bowl's in our league. He USUALLY wins the Super Bowl in our league.