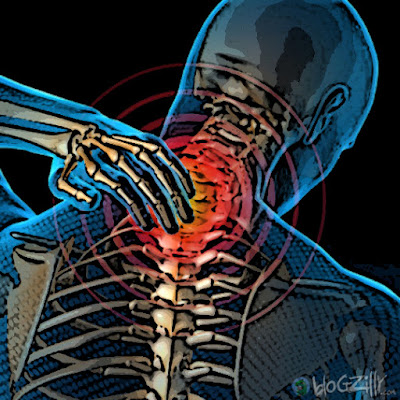 OK, this pain and insomnia stuff.

It's been around a long time. But for some reason this year it's accelerating. Even though I had said this space was not going to be the Lilly Health Report? I lied. It is. Because for the time being it has consumed a vast percentage of my life. I can't ignore that. I can't sweep it under the rug.

Psychologically I feel compelled to keep it to myself because of my late Gramma Ina. I did love her, so please don't misunderstand what I am about to disclose. First of all, it isn't necessarily polite to speak ill of the deceased. Unless they were assholes. She wasn't, FYI. But I have to take care because this particular deceased's daughter, that would be my Ma, reads the words contained herein.

So I gotsta tread...lightly. You understand. 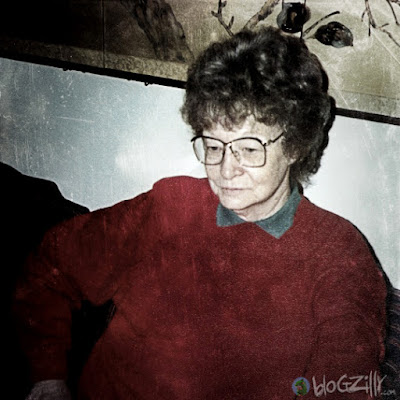 Gramma could cook circles around everybody. EVERYBODY. Including my Ma, and my Ma would admit that freely. But eventually as with all things that changed, and my Ma became the Champion of the Corningware. But for YEARS my Gramma ruled supreme in the kitchen.

Having a coffee can filled with bacon fat at her fingertips made that easier. I swear sometimes I think she had that thing strapped to her belt like a gunslinger in the American West had his trusty nickel-plated Colt.

She slathered that shit over EVERYTHING.

Over easy eggs? Bacon fat! Frying up some chicken? LOTS of bacon fat! Green beans? Yeah why not? Bacon fat! Baking a cake? Ba--um, no Crisco, waddya crazy? Crisco in case you don't know is essentially another type of heavily processed lard. But you CAN have your cookie sheets greased in bacon fat. I've seen it happen. In here house when she ran out of Crisco. Most people would use butter. She seemed to prefer bacon fat over butter. I even saw her spread bacon fat on a warm biscuit, I shit thee NAY!!! 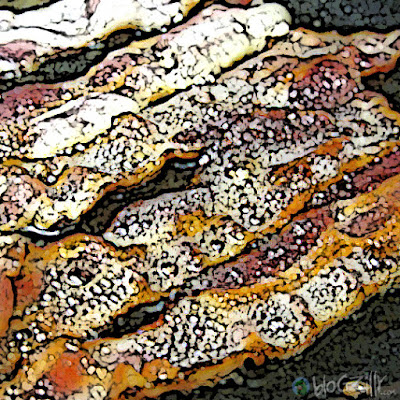 It is quite possible my Gramma consumed bacon and eggs every day well into her 80s. And her heart was just fine. Of course, the smoking is more likely what contributed to any decline in her health in her later years, and her strokes. But she lasted a long time. Imagine how long she may have lasted if she cut back on the smoking and the Whitmore samplers and the bacon fat?

One can only speculate.

Yeah...I'm headed a bit off the reservation. I do that from time to time, especially when I start thinking about the old days. All that bacon. Damn that shit was good. Eh...who am I kidding? I wouldn't touch the shit now. It's fucking gross.

Like I said I loved the old woman. Well, except for when she would read every single street sign in the car while I would be driving her somewhere "Kenneth! Salvation Army Christian Center for Worship and Service! Sign Broken Message Inside on Sunday! Isn't that Something Kenneth?" That's something alright. Or when she would have me choose my own "switch" from her backyard when I was a kid in order for her to beat me with it when I was out of line. Look I get that times were different, and she didn't understand that corporal punishment is bullshit and serves not to build a child who is obedient and dutiful but instead creates one who is terrified and has a monumentally dysfunctional sense of self-worth. 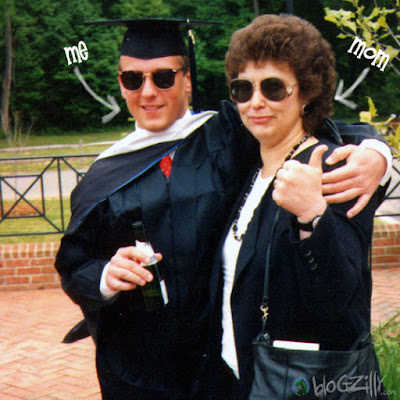 But those were the times, it's what she knew, and people like her...they never took a spanking where it should not go. For the record the switch selection process, in fact switches in general, were abandoned by my Mom. Always appreciated that. (Holy...I'm just a kid up there. Where DID the time go?)

But one thing Gramma did that REALLY got to me? Holy shit on a shingle did she bitch about what was ailing her. From pimples to headaches to bunions to minor skin irritations to constipation to aching joints to heart palpitations to strokes to...I'm kidding, of COURSE anyone is entitled to complain about constipation. The thing is, it wasn't stopping with the actual first impression of what was troubling her. Escalation was a certainty.

My mother was so worried about The Apple falling too close to that particular tree that if she were shot in a drive-by, she would probably tell me she was stung by a bee. She tends to downplay the things that affect her. She fights through it, usually with no outward sign of distress. I know better. But I'm her son. This makes communication between the two of us difficult. Very difficult. Particularly since she has an illness from which there is no recovery, lives a helluva long way away and prefers to be low key about how she is feeling. It's OK, there is an unspoken language between us.

Primarily because I'm somewhere in the middle with a leaning toward where she is. That may be hard to believe, considering all I've revealed in the past here. But I consider much of what gets written about here as the "blogzilly" aspect of myself, not necessarily a true representation of how I am in everyday life. Here I feel the compulsion to write, to share, to be somewhat dramatic. Having that TMI reputation is a badge of honor I wear proudly. 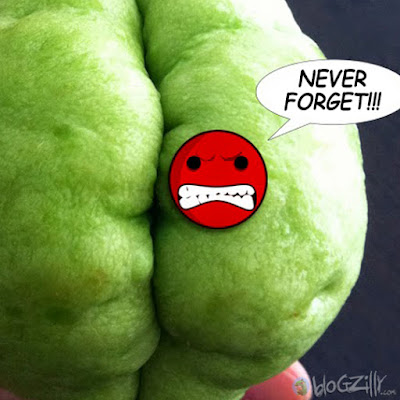 Those posts about The Thing, the ambulance ride to the ER, the colonoscopy, the tonsillectomy, the food poisoning, and who will ever forget Buttface? You were REALLY trying to weren't you? They were fun. At least...after the fact. I don't look at those activities the same way I look at Gramma waxing melancholic about a new mole on her back growing a tenth of a millimeter while the family is sitting down to Thanksgiving dinner.

I'm writing about them...it takes on a different flavor then. I used to say 'blogging', which is true, I am. I was ashamed to use the term 'writing' since this isn't a book, and has funny pictures of faces on butts sometimes and is, in fact, in a BLOG. But I don't just toss words on a screen like shit and see what sticks. I take my time and I craft a lot of this stuff. It's somewhere in between blogging and writing. It's...I dunno...Bliting! Or Wrogging.

You heard it here first.

It might surprise you that I have a physical scheduled for November 3rd with my GP. To date I have been OK with this, even though week to week my symptoms seem to be deteriorating, changing, morphing, whatever. Part of the lack of a desire to rush is because I have always been this way. Been like my Mom. Calling the doctor is not the first choice.

The first choice is what can I do on my own to solve my problem?

This frustrates me about her, just as I am sure it frustrates my Mom about me. But I have to admit I admire her for it. And I am grateful for that trait that through no real purpose or effort she passed along.

Because by waiting and not rushing to a doctor I have time to learn. To try things. To make adjustments that could benefit me long term. If you have read these pages before you know that I have made good choices in the past, and many have stuck and been successful for me. Quit smoking, gave up soda, gave up red meat, then all meat. Went to a plant strong diet...fell off the wagon on that. A lot more needs to be done.

From the look of things, this whole mush-mash of symptoms is quite possibly a long-term problem brought about by years of bad living, no matter what course corrections have taken place within the framework of the past five years, and the monumental stress of being a Special Needs Dad. Stress unchecked, I should be specific. I don't manage my stress well. I don't vacation, yoga, I barely exercise, all that stuff. That all needs to be altered.

So I'm working on it. Got some PT equipment and am strengthening core to move to more physically challenging efforts. Picked up some books recommended by some doctors I trust. I'm reading product labels like they were the works of Sun Tzu. I have eliminated Gluten now from my diet whether I need to or not, kept Dairy out, and am constructing a plan to do the same for Bennett. How many times have I talked about wanting to do that and never done anything about it? Well, because my own issues are what they are, I can't make excuses anymore. Carter will take some...convincing.

I can't beat myself up for any failures or mis-steps along the path.

Not long ago I joined Instagram, in an effort to expand my Social Media knowledge. I had no idea what a good move that would turn out to be. That and a renewed look at apps like Twitter and Pinterest have opened new doors to people with tons of experience regarding not just Special Needs but Health as well. There are a lot of excellent, positive messages to be found there.

Probably not news to many of you reading, but remember, in the Dad community, these things are not as natural for us. We don't share, we don't pin, we don't blog as much as the Moms do. In fact, I don't even think there is a pop culture equivalent for the phrase "You go, girl!" that men can use with each other. (That may not be a bad thing, if you want my honest op on that one.) 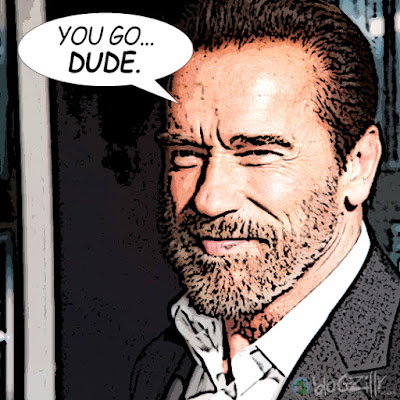 But the lack of real unity of community speaks volumes of our nature. And our nature holds us back in a lot of areas, one of which is taking better care of ourselves in matters of healthcare and pain and stress management. Traditionally. Not all dudes are created from the same Duderons.

Having said ALL that? And meant every word. I am not going to wait for the 3rd of November to see my doctor. If the ladies have some inherent right to change their minds on a dime, then the men should have that right as well. I had put in in a call late last week to my GP's nurse line, just asking for some advice. Nurse is a DUDE, how about that? The doc was on vacation but earlier this week I got a response and the next steps are Rheumatologist and GI guy. Wouldn't be a bad idea to go back to an Ortho dude I saw before either, especially after the straight neck X-Ray, get some kind of PT regimen that is more structured into play. Already got a call back from GI, and an appointment is scheduled.

So there we are. Another Lilly Health Report. Hopefully a bit more entertaining than the last one. What am I saying? Of COURSE it was...that sound you hear? It's me patting myself on the back.

Damn that hurts... Shut it Gramma!