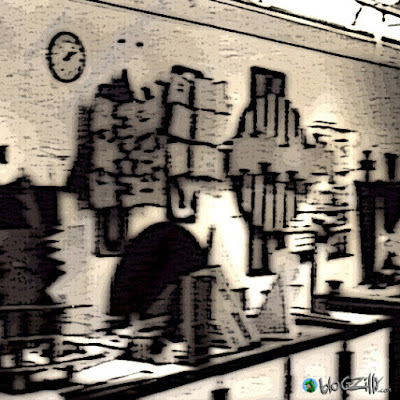 What can I say? Shit happens!

The excitement I feel over the picture up top can only be matched by, maybe, the electric sizzle I got last week when I thumb tacked a poster on my bedroom ceiling of Erin Gray as Colonel Wilma Deering. Wait…I meant, when I was a much younger man.

Still, I'm excited about the photo!

As an artist most of my life I have lost a lot of actual artwork. I've given lots away, had some stolen, and in fits of emotion even destroyed pieces. My attitude over originals used to make my former boss at Palisades shake his head at me in disappointment.

"I dunno…I suppose because if I want more, I'll just make more."

Which was total bullshit, I never did that. Well, rarely. 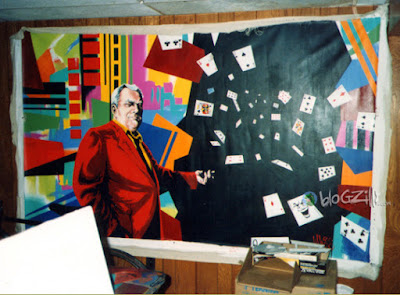 As I've grown wiser, matuuuured, I see the wisdom in that head shake. Now I cherish the discovery of pieces I didn't have anymore. Like the painting above. Gave it to someone in Grad School. I think. That's the worst. When I can't even remember where they go. But when they somehow find their way BACK? WOOHOO! It's like one of my long lost daughters stopped hating me for making them look like a dude and returned with forgiveness for all! Oh happy day!

And I'm not picky, I love the originals, but I will take photos if that's all I can get.

This single, super out of focus black and white is of a beast of a project that was my Senior Thesis in my undergraduate studies at St. Mary's College of Maryland. A mixed media Assemblapalooza regarding families and the subtle abuses they inflict on each other as adults in the psychological gamesmanship they use.

It was a culmination of work about family, specifically my step-father, started years before in Drawings and Paintings. Though I admit I did sometimes work the Old Man into my comics work. If I needed some poor sap to get gnawed on by some hungry demons? Guess who drew the short straw? Even Artistic revenge has a kind of sweet taste to it. 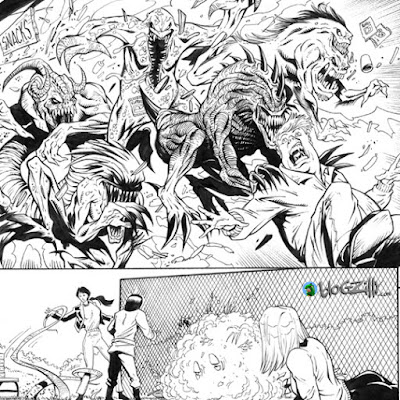 But the closure piece to all that junk, designed to wrap it up so could write the final chapter on it? I've had no existing visual record of it that I could access. And I want one big time. So much happened in and around that group of pieces. Regarding the art itself, my relationship with my step-father and its closure, my girlfriend and the dismantling that work had on us. The more I assembled the project, the more I disassembled the two of us.

This work had a major impact on me as an artist, maybe the greatest of my life, so much so that it likely dictated the path my career would take from there forward.

All that from a bunch of wood, foam, paint, photographs, nails, screws and found objects?

Well, yeah, it's me remember? In fact the whole dramatic tale could be an interesting foundation for a unique book. At the very least a multi-part blog post.

But to get there I need much more info. Much more.

This is what I call a decent start. While doing my daily ORG! I found a stack of contact sheets and negatives. All black and white photos from my college days. I saw around 6-7 pics like this one (and some titillating ones of the Senator theater at night, Memorial stadium on the day of the last game, old buildings in Bel Air and Harford county now long gone. Even a few of my mural I painted in the art room at Harford Community College (like the one below). In progress shots instead though. Neato. 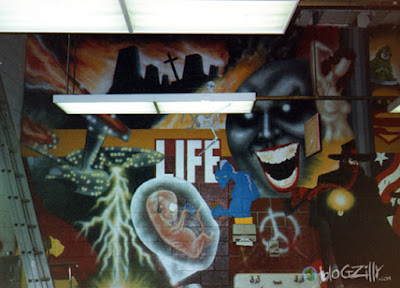 I gotta figure out how much to get the negatives transferred to PC, and so on. But it's exciting to know they are there.

I know I have a VHS of the finished piece. I don't know if the tape has degraded. I need to get that transferred to digital post haste also.

Paid 99.00 for a Microsoft Office 365 Membership today. With my fingertips in so many little projects, it was time to pull the plug. Glad I did. All day I was getting things done faster in the business, in the file organizations, spreadsheets, everything.

As I get further along on assembling something on this, I'll post updates.

Email ThisBlogThis!Share to TwitterShare to FacebookShare to Pinterest
Labels: Art and Artists, Family