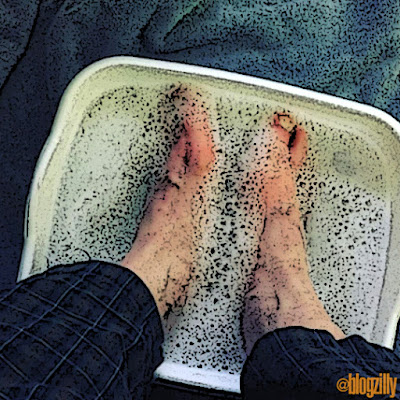 I was hoping for a slightly better piece of writing to return with, but screw it. I gotta just get started. I've had so many false starts I was starting to feel like OT Laremy Tunsil of the Miami Dolphins. So I gotta just jump right in.

You're familiar with the Memories section of the backend of your Facebook page? Of course you are, you are Social Media savvy. For those few dumbasses out there that aren't, like me, it’s the doohickey that tempts you like a sly ex-lover to share a post from your world wide past.

Could be an embarrassing commentary you wrote while incredibly stoned, or a heartwarming photo of your 4-year old, before he became a teenager and all that angst and anger started spurting forth. Or better, let’s celebrate the date you became Facebook friends with a Facebook friend you don’t even talk to.

Still, it has its place, if only to remind you of things you otherwise may have forgotten. Today mine showed me my disgusting feet from one year ago. Swollen, bleeding, sore...soaking in a tub of warm water after a very long day of moving boxes from one house to another.

Ironically, I saw it while sitting in the exact same place, with a heating pad on my lower back and hip and a frozen gel pack on my abdomen and neck. This caused by 2 days of hauling around bins, books, and boxes in an effort to organize and consolidate some of what is essentially mounds of half-crap, half-crap I want. I have to separate the wheat from the chaff to minimize the bulk so that I am not being crushed to death by the psychological weight of it.

The crazy thing is that these crap mountains have followed me since 2013. I have moved them four times. I won’t move them a fifth. And I never know when a fifth may be coming. So stuff's gotta go. And I’m on my own with this task.

While a lot of it is product samples from my dead career, even more is just accumulated Shitola that should have been thrown out a lifetime ago. Am I a hoarder? It is a worthy question. But the real question is, why haven't I chucked it by now?

Take a sip from a flask, channel a young Bill Murray as Dr. Peter Venkman and say with a smile...."I don’t know."

Exhaustion. Depression. Addiction. Despair. Anxiety. Loss of hope. Posturing between two people who can’t learn how to navigate the simplest of issues in order to make forward progress. All of the above? Things have moved sideways here for a long time. Not forward. I have a whole different post about how I've lived the same day over and over for the past 7 years. And it has some good Bill Murray references too. 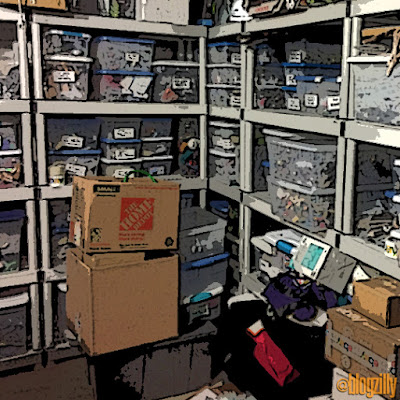 But that was then. This is now. Somehow, I don’t know how, I just decided that I didn’t want to walk sideways anymore. I didn't want to wake up and relive another day like the day before.

That’s not entirely true. The part about not knowing. I do know. Three sustained years of therapy. What a difference a real commitment to mental health makes. I continue to make drastic change in myself. Meaningful change. I experience life in ways I never dreamed possible. I’m not the answer man by a long shot. But I am asking lots of questions. And I do find answers.

Speaking of...my abdomen is in complete distress. It’s like that whenever I do anything even lightly physical. It swells up, becomes incredibly painful, tight. My quest for answers regarding why leads me back to late 2016 and, coincidence or not, the time that photo was taken. It was 6-7 months after my surgery when I started packing tons of stuff to move into the house I’m living in right now.

I did not want to purchase a home at that time, being so close to my surgery, issues with Bennett that he usually has in the Fall, not being ready, wanting a lot of time to find the right place...and had several discussions regarding my desire to hold off until the following Spring to start looking. But a defining characteristic of my marriage is that much of the time what I want is not considered relevant.

That was end of September when pre-packing started, because a Buy was imminent and I knew it. It occurred in October, of a house that had around 3 of the 10 things on the list of what we were supposed to be hunting for on it. By end of November with all of the moving I thought I was going to drop, and my body was not handling it well. Mid-section swollen, feet swollen, back effed up. Was moving stuff over every day in my 4-Runner.

Why I was alone this Thanksgiving weekend? I could have gone with my wife and kids 2 hours north instead of staying here. But I stayed. The fact is I was originally supposed to go see my Mom, who I haven’t seen in years. We had some financial issues...related to buying this house (oh the ironies continue). So I could not afford to go. But then consider these things.

I started having bad headaches. Saw a doctor, have some scans set up for early December, but it’s a good thing I didn’t fly. Changes in pressure? Not a good idea. Coincidentally my Mom's husband ended up in the hospital on T-Day. He’s OK, but they needed time to deal with that. 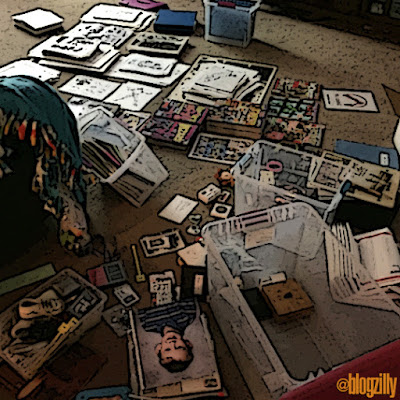 So I was here, and I didn’t go with the crew to my SIL's house. With no worries over Bennett getting into anything, I was able to spread stuff out and get a ton sorted. Wheat from chaff. Made a nice dent in the garage. There was a time when I would have played my PS4 the whole time. I don’t even recognize that person anymore.

I chomped down hard on the project, and was in pain for most of it. But I didn’t care.

Everything is connected. I never really allowed myself to see that before. I am starting not only to see it now, but to believe it.

Seeing that photo reminded me of my anger over the move and what it did to me sure, but it was pushed aside easily and settled more onto the positives that came from doing it, things I discovered during, thoughts that gained even more focus. All connected to my discontent over where my life has been, where I want it to be, what I need to do to get it there. 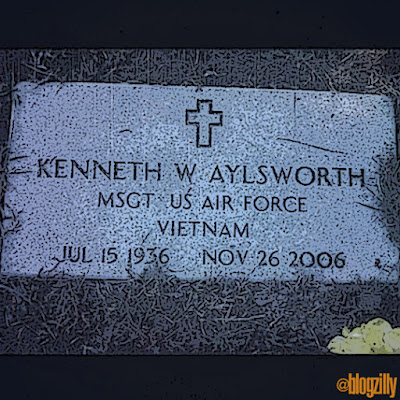 These link to my desire for a brighter future and strangely re-connected me to today, the day my Father passed away 11 years ago at the age of 70. I don't grieve this day the way most people might. We didn't have that kind of relationship. He left when I was five, I saw him sporadically from 5-10. He didn't want much to do with his kids. That was just who he was.

I last saw him when I was ten years old. And didn't speak to him or see him ever again. I have no regrets. I think about him from time to time, but more so how it relates to how I might be as a father, or how my health might be affected by who he was. I happened to find a photo of his gravestone over this weekend. Coincidence? I doubt it.

It was a message. A message that I am on the path I need to be walking. I'm 50 now, and I want more years than he had. And I want those years to be quality. Maybe some adventure, some excitement. I’m no Jedi...so I do crave these things, more often every day.

All I have to do to get there is keep chipping away at these mountains so that they don't stand in my way anymore.
By Kenneth Lilly - November 27, 2017