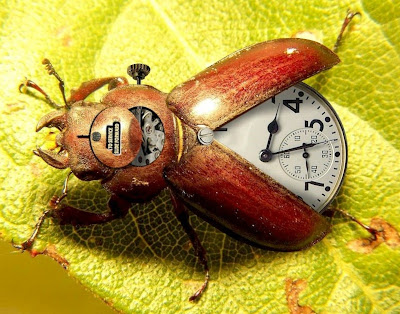 Where DOES the time go?

It's baffling to me how little time I have spent on the Internet overall in the past several months. Well, unless you count my time spent on X-Box Live, but we won't get into that.

But here? Or Facebook? Or reading other people's blogs? Stuff like that? I am a ghost, an echo of the person I used to be. There are a lot of reasons why. Won't bore you with all of them. Besides, I'm not even sure of the following:

1. Who is still around.
2. Who really wants to know the nitty gritty.
3. Who detailed I want to get into all the shit that has gone down over the past few months.

Besides, I've known for a while now how badly I need to reboot this blog. Maybe reboot is too weird or too specific a word. Rethink it might be better. I mentioned last time the possibility of walking away. And I gave it a lot of thought. There is a large part of me that thinks I should. Some of the things I have written have hurt people, some things haven't gone over well at home. 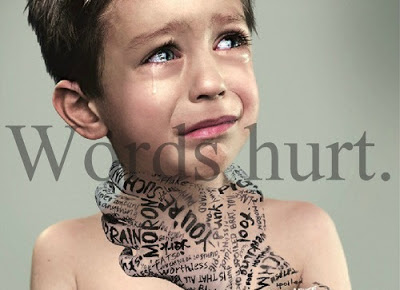 Then there is the whole question of what will the kids think when they are older? Will Bennett be ABLE to read this and if he can will he feel that he was represented in a fair way? Carter, when he gets around to seeing this, is it going to divide us even more than we already are when he sees the disparate amount of time I spent writing about Bennett and not him, even though the reality is that Carter is often on my mind as much or more than Bennett is but Carter's issues are just things that sometimes I don't want to go into publicly?

Though maybe I should. I don't know. Like I said, I think I need to give this space as much of a retooling as my life is undergoing, and if that means shutting it down completely rather than trying to make a bunch of changes I should consider that as an option.

Always wished I could figure out how to morph writing into making a living. My Mom would love it, and I certainly would love to do something that would make her happy. Just do not know how, certainly not by starting from scratch as a raw freelancer, and especially not right now with all the stuff in #3 above that is still going on and will be for months. 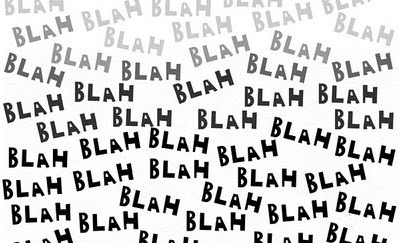 I'm rambling a little, but hey, rambling might be better than saying nothing at all. I want to try to at least get something written. Even if it is nothing special. I feel the need to take a queue from Heather and do some gratitoody posts and theme it in November, maybe shoot for a month of posting again.

Why try to get back on the horse and ride so hard so soon after so much non-postage? Because I have to honor my friendship with her and get started on getting back into a groove so that I can do something with Mission: iPossible as well and get that moving again. I owe her, I owe the families involved with that and everyone who has followed that project. To say I have dropped that ball is more than just an understatement.

That's about it for now. But just for now. 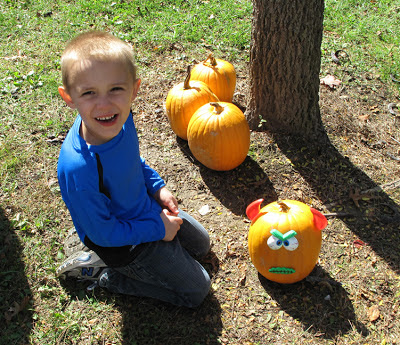 That the wordiest, go-on-way-too-long about way-too-many-off-color-subjects guy just hasn't had a whole lot to say lately? Maybe. Could be. Weird that is. Then again, it could just be a phase. Or a virus or something. Though I am giving serious consideration to putting this blog to rest for good. Food for thought. 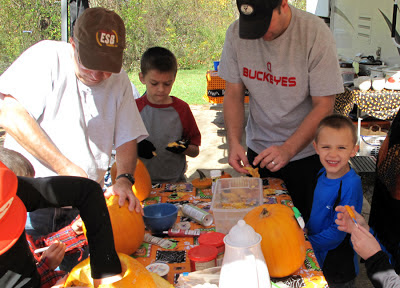 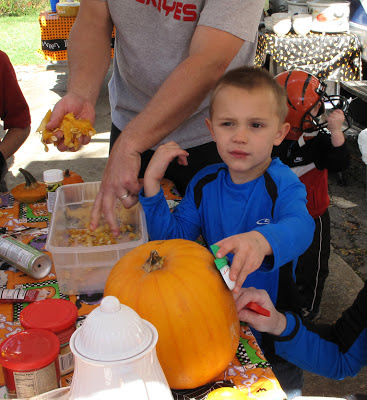 But while I have no words, today, I do have pics, from this past weekend, taken during a local Halloween Trick-or-Treat event. 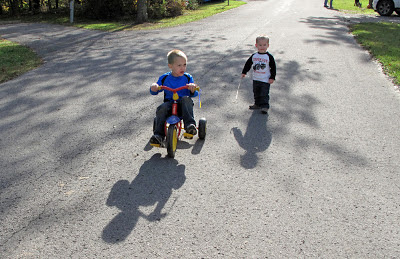 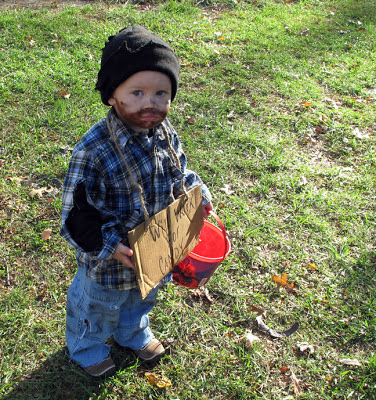 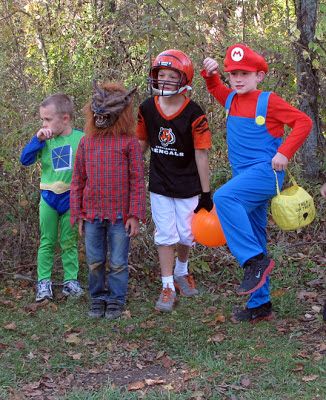 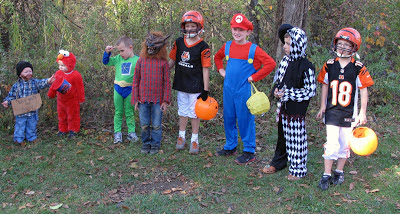 This is an annual thing held at campground (has to happen kinda early because of cold weather, 'natch) where my wife's parents set up their camper and hosted lots of family members who slept over some of the nights and also on Saturday participated in the campground's T0T candy-seeking festivities. 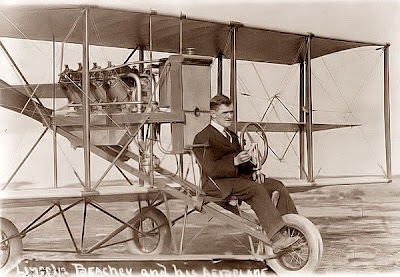 You have to go home.

I've spent the last week visiting my Mom at her home in Arkansas. Jen, since she had the week off, was able to be the designated driver for Bennett for his therapy stuff, so she took care of all of that in Ohio and it freed me up to visit my family. It sucks that we often have to do things this way, but when you have a kid with a disability, you often have to do things this way.

But frankly, I needed the break. Things haven't been all that easy back home of late, and I don't expect them to have become any easier in my short time away. All the things that I may have hinted at or even talked about at length all seem to be headed to a convergence, in this upcoming Fall/Winter, and the pressure is enormous. 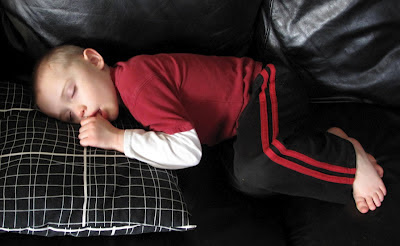 Not to mention that there has been and seemingly always will be the Bennett Factor.

A couple of weeks back Jen was taking Carter and Bennett somewhere and when Carter realized Bennett was coming with them he said "Aw MAN, Bennett's coming? He ruin's everything!" 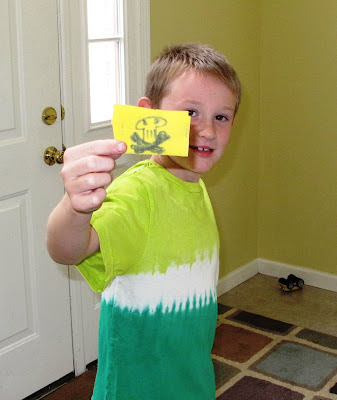 I can't BLAME Carter for saying this, or even for feeling it, because it is often 100% on the money. Having Bennett along is often like having Bruce Banner for your best friend.

Sometimes you don't know WHO is showing up to your party, know what I mean? 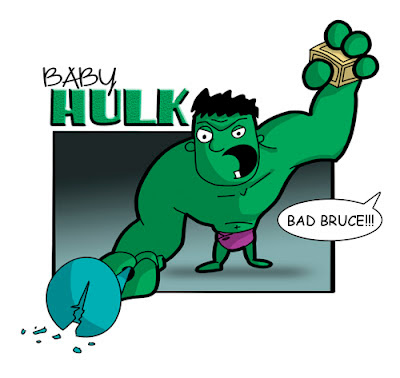 But I want to believe that it isn't going to be like this forever. Because the alternative is just...well, I don't like thinking of any of the alternatives, especially when Bennett becomes extremely uncontrollable, and I start projecting years down the road. No need to go there yet.

Tonight, I fly back home, and while it has been great to see my Mom, and while I don't want to say goodbye, I have missed my boys and my wife, no doubt there. And my job now is to figure out how best to take this past week of R & R and determine how to use it to serve them best, to help all of us weather the months ahead, because they are no doubt going to be some of the more difficult ones we have faced to date since the post-surgical times.

The good news is that it is Fall, which means cooler temperatures...PERFECT timing to get out the Big Boy Pants.